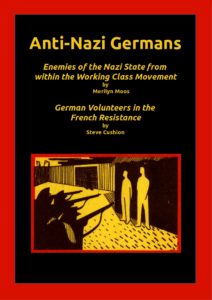 I was invited to speak at the launch, on 26 March, of Anti-Nazi Germans, by Steve Cushion and Merilyn Moos. The launch had to be cancelled, but the following is, more or less, what I should have said.

For details of the book see http://www.socialisthistorysociety.co.uk/?p=945

You can get a copy post-free from the authors: £10 – more details from: s.cushion23@gmail.com You may pay by cheque, bank transfer or PayPal

In one of his last interviews Eric Hobsbawm said that “the whole function of history is precisely to be a pain in the arse for national myths.” It would of course be grossly discourteous to call Steve and Merilyn “pains in the arse”, but they certainly are fulfilling the function of good historical writing.

National myths are still very much with us, as we saw during the increasingly bitter and sterile debate about Brexit. The “spirit of the Blitz” has been tediously invoked, not only by Brexiteers, but to described the impact of coronavirus. Boris Johnson’s fantasy of emulating Churchill is mere buffoonery (Churchill was murderous, but he wasn’t stupid). But more broadly the infection has been seen as a foreign invasion, with its Chinese origins being used to incite racial hatred. Marine Le Pen’s notion of “bacterial immigration” has found echoes on the far right.

So restoring the truth about World War II is a deeply relevant task. The war was a complex affair. As Donny Gluckstein has argued [A People’s History of the Second World War, Pluto, London, 2012], it was two wars in one – a war between empires for power and profit, and a mass popular movement of resistance to fascism. The two constantly overlapped and interacted.

As a result, the war cannot be seen, as it is often presented, as a war against Germany, in which all Germans were responsible for their state’s crimes. Just ten years before Hitler came to power, Germany had seemed to be close to Communist revolution. A significant section of the German population remained deeply opposed to Hitler and all his policies. A few writers at the time tried to point this out – notably Daniel Guérin, who published a detailed account of a visit to Nazi Germany – but they were largely disregarded. But as Merilyn shows, in the early years of Hitler’s rule the main enemy was the organised working class – the trade unions and the political parties of the left. The regime’s priority was to destroy these. Of course the vile anti-Semitism was there from the very beginning, and it should never be underestimated, but it was not the central priority – some Zionist organisations were allowed to survive until the late thirties.

So what Steve and Merilyn have done is to carefully assemble a mass of information about the development of an opposition to Nazi rule, and to rescue from the neglect of history the many courageous individuals and groups who succeeded in opposing Hitler’s rule.

As Merilyn points out, the opposition could take a variety of forms, from sabotage to jokes. We learn, for example, about the Dresden Trotskyists who passed themselves off as an organisation of mountaineers in order to smuggle oppositional literature across the frontier. Robert Havemann, later an East German dissident, helped to found a group to support forced labourers

Of course many resisters paid the ultimate price – the Nazi regime was tough and brutal, and was quick to crush those who tried to stand up against it. But the resistance was not wholly ineffective. In the last year of the war Germany began to bombard Britain and other enemy countries with missiles – the so-called V2 rockets. But only half the planned number of V2s were actually produced, partly as a result of sabotage by workers. As Merilyn points out, “some Londoners will have owed their lives to these acts of bravery”.

Steve also challenges a “national myth”, that of the French Resistance. In a sense the very name is misleading – it presents the struggle in France as though it were a fight for national liberation. After the Liberation in 1944 the main political forces in France – the Communist Party and the followers of de Gaulle – combined to present the Resistance as a struggle for national independence.

In fact the German occupiers had a lot of friends in French society – Steve cites a French factory owner as saying: “I would rather see my country occupied by the Germans than my factory occupied by the workers.” There was a powerful and deep-lying anti-Semitism in French society, going back to the Dreyfus affair. Sometimes it was the French who were demanding more repressive measures against the Jews.

In fact many of the activists in the Resistance were not French at all, but people of various nationalities who were fighting, not for French independence (and certainly not to maintain French rule in Indochina and Algeria which France clung onto so bloodily after 1945), but in order to weaken and destroy fascism, which they saw as an international threat. These included many Germans, some of whom had fought in Spain and after the defeat of the Republic found themselves in France. Numbers joined the armed struggle against the German occupiers, even though they faced particularly harsh treatment if they were captured. In Nîmes in 1944 Germans were prominent in the parade to celebrate the Liberation.

Many Germans participated in the tactic favoured by the Resistance and especially the Communist Party – the assassination of individual German soldiers. But Steve also recalls the case of Martin Monath, a German exile living in France, who played a central role in producing the paper Arbeiter und Soldat which argued for fraternisation between French citizens and German soldiers, who were seen as potential activists for a revolutionary upsurge in Germany at the end of the war. Monath has long been a shadowy figure of whom little was known, but there is now a remarkable biography. [Nathaniel Flakin, Martin Monath: A Jewish Fighter Among Nazi Soldiers, Pluto, London, 2019]

Of course the account of events presented here leaves many questions open – there is no attempt to present things from the standpoint of one “correct” political position, Thus Steve argues in defence of the Resistance policy of individual assassination, claiming that mutiny is rare in victorious armies, and that German soldiers facing defeat would be more likely to rebel against authority. Personally I am more sympathetic to the position of the French Trotskyists that “the terrorist act creates a barrier between French workers and German soldiers, but no victory is possible without unity between them.” But readers should judge for themselves on the basis of the evidence.

In commending the book I should declare an interest, namely that I have known both authors for many years – Merilyn for over half a century – and have been active alongside them in many campaigns. Both remain stalwarts of the London UCU retired branch. It is important to note that they are activist historians. They are not buried in the archives, seeking to advance their academic careers, but see their historical work as just one aspect of their political activism.

Hence their historical understanding is illuminated by their political experience. Of course they live in a very different world from that of the 1930s and 1940s – though as they note in their conclusion, there are some “frightening similarities” between our world and that which gave birth to Hitler. But they know from their own lives the importance of organising collective action; they know what a united front looks like and how it should operate. Hence they have made their contribution to the urgent task of undermining national myths.

It seems that over the coming months, with no distractions like football, we shall have plenty of time for self-education. This book deserves to be widely read.