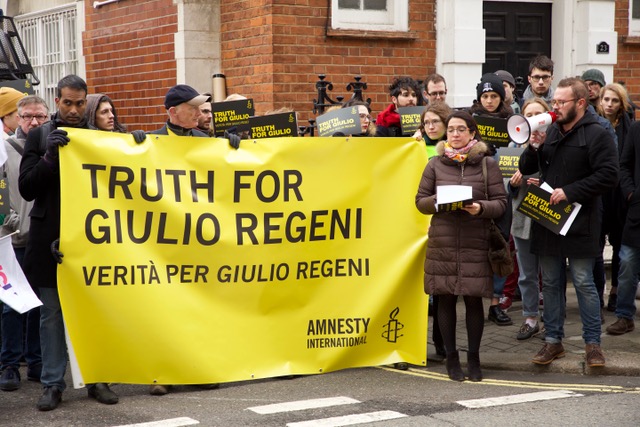 Friends and colleagues of murdered Cambridge PhD student Giulio Regeni gathered to protest at the Egyptian embassy with campaigners from Amnesty International and the UCU union on 2 February, marking the second anniversary of the discovery of his body. This protest followed a vigil of around 150 people in Cambridge on the anniversary of Giulio’s disappearance.

Giulio’s friend, journalist Laurie Blair spoke at the protest:
“We, the friends of Giulio Regeni, will not forget about him. We will not be silent. We will resist any cynical attempt to divide us, because we know who our enemy is. We will stand firm and support each other, knowing that we cannot bring Giulio back to his family, but we can try to prevent the same horror from happening to others.

We will not rest until you, who are ultimately responsible for our friend’s murder, are made to pay for your crimes.”