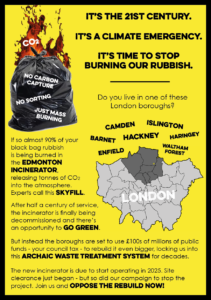 The incinerator is an environmental disaster. Waste incinerators currently release an average of around 1 tonne of CO2 for every tonne of waste incinerated. The release of CO2 from incinerators makes climate change worse and comes with a cost to society that is not paid by those incinerating waste. Over the next 30 years, the total cost to society of fossil CO2 released by UK’s current incinerators will equate to more than £25 billion pounds of harm arising from the release of around 205 million tonnes of fossil CO2. the Edmonton incinerator will have a consumption capacity of 700,000 tons. It will be reliant on ‘importing’ waste from outside of the NLWA boroughs. Many more incinerators are being planned in London’s poorest areas,  such as Purfleet and Sutton. DEFRA acknowledges there will be over-capacity in London resulting in waste being bought into London from the Home Counties and other areas in an effort to maintain economic viability of the incinerators. The incinerator will therefore attract heavy goods traffic on already over-congested roads in the London area, thereby increasing pollution.

The plant will be linked to the Meridan homes development, as a district heating network. This will lock in a polluting technology rather than future proofing for better homes building standard, increasing rates of recycling and new materials to phase out single use plastics.

In 2017 the UK’s 42 incinerators released a combined total of nearly 11 million tonnes of CO2, around 5 million tonnes of which were from fossil sources such as plastic. In addition to greenhouse gases, incineration releases nitrogen oxides, sulphur oxides, hydrogen chloride, dioxins, furans, heavy metals, and particulate matter.

There are many alternatives. Landfill or exporting to poorer countries are not the only alternatives. Alternatives include material recycling facilities, ‘mechanical biological treatment’, steam autoclaving, underground storage of sorted materials, and anaerobic digestion.

Composition analysis indicates that much of what is currently used as incinerator feedstock could be recycled, reused or composted, resulting in carbon savings and other environmental benefits. We need a system that sorts our rubbish and makes the best use of each type of material. A small portion will still end up in landfill or incineration, but at nowhere near the scale envisaged for the proposed NLWA incinerator.

There is a real need for a zero waste strategy. This will not result in less jobs or worse jobs, quite the reverse. A waste system that prioritises recycling and reuse would provide just as many if not more jobs, and safer jobs at that. There are serious issues about health and safety risks to workers at incineration plants. Studies have found that incinerator workers have heavy metals and other toxins in their blood and urine. The pollution threats to the neighbourhood around the incinerator are even more severe for the workers who operate it. Local Authorities should be committed to a green new deal which means the money spent on projects like these should be redirected to those that will create many more safer greener jobs.

This is not merely a question of what type of plant to build. It’s about the type of waste management system that the residents of north London should have. The NLWA wants to spend more than £1 billion of public money on a new incinerator when it could invest that money not only on high-tech sorting and recycling facilities, but also in its people. Roughly half of the rubbish going to Edmonton could be recycled if people simply threw it in the right bin. If more money were spent on education and awareness raising, much of current ‘rubbish’ could be recycled. These incinerators tie councils into expensive, restrictive contracts. For cash stretched councils this often means at the expense of other forms of ‘green’ recycling methods and thereby reduces the potential creation of more environmentally friendly jobs.

And, of course, the waste problem could be greatly reduced in the first place by banning the use of plastics for packaging, food containers, water bottles, carrier bags and other single uses.