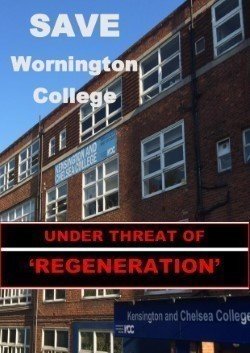 The government has pledged up to £32.3 million to help buy back a college campus that serves the community affected by the Grenfell Tower fire – marking a huge win for campaigners.

The funding will support the recovery and refurbishment of Kensington and Chelsea College’s site on Wornington Road, as well as its merger with Morley College.

The Wornington site was sold for £25.3 million to the Royal Borough of Kensington and Chelsea in 2016, despite heavy local opposition.

This is a hard fought victory for the North Kensington community

An independent review conducted by consultancy firm Kroll later concluded that the sale was not in the interests of its local community and KCC’s new leaders branded the sale as “plainly wrong” and “shameful”.

Campaigners have been fighting to recover it, and even brought the issue to prime minister Theresa May two months ago.

It will now come back to the college at a cut price, after an agreement of just £10 million for the campus was agreed between the government and Kensington and Chelsea Council.

“This is a hard fought victory for the North Kensington community,” said a Save Wornington College Campaign spokesperson.

“The tenacity of groups like the Save Wornington College Campaign and the Friends of North Kensington Library show that you mustn’t give up hope when faced with the big beasts of the establishment.”

KCC’s latest accounts show that it has hit a deficit of more than £10 million in the past three years which is eating into its “significant” reserves of £34.6 million, which were built up partly by the controversial sale of the Wornington campus.

The embattled college, which received its fifth consecutive grade three report from Ofsted earlier this year, announced plans to merge with Morley College in March in a bid to secure its long-term future.

Of the £32.3 million, the Department for Education will provide £23.6 million, The Ministry of Housing, Communities and Local Government will stump up £8 million, and the Greater London Authority will give £700,000.

Skills minister Anne Milton said: “The Grenfell Tower fire was a terrible tragedy and its impact will be felt by the local community for many years ahead. This funding will support the planned merger between Kensington and Chelsea College and Morley College so local people can get the high-quality further education and training they need.

“It is good to see everyone working across government to make sure that Grenfell residents get much needed support.”

“Our board and leadership will examine the full implications for the future of the College, in the context of the proposed merger with Morley College, over coming days.

“Both colleges remain committed to a successful outcome of our plans to secure high-quality further education in the borough.”

Communities secretary James Brokenshire added that it is “essential that two years after the Grenfell Tower tragedy, the people of North Kensington continue to get the support they deserve to help them rebuild their lives”.

And minister for Grenfell Victims, Nick Hurd said this decision is an “important step in securing a vibrant future for a much loved Community asset”.

“A big collective effort went into making this happen, and I pay tribute in particular to a passionate residents campaign,” he added.