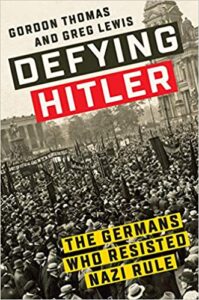 The absence of interest in the past is easily explained. The resistance did not fit easily into the conflicting ideologies: the Americans wanted nothing to do with movements which smacked of Communism, and the USSR, though more apparently supportive, regularly saw the organised resistance as too autonomous or too Jewish.

Even now, the books which are appearing focus on the more ‘respectable’ end of the resistance. Such is Thomas and Lewis’s book. Their book is important in taking on the still current myth that there was little to no resistance in Germany. It also recognizes the political range within the resistance, from those who feared that Hitler and his cronies were going to lose Germany the war and wished essentially for everything to be how it was beforehand to those whose wished to construct a post-war democratic Germany.

The book recognises the figures which have already received attention, such as the group around von Stauffenberg and the July 20th plotters, the White Rose group and the Harnack circle, part of the mythologised ‘Red Orchestra’. It also draws attention to the relatively unknown Baum group, who drew from both Jewish and Communist roots, though thy authors emphasise its Jewishness rather than that many of its members had strong affiliations to the KPD. (Surprisingly, this is the only point the book looks at the significance of ‘Jews’ in the resistance.) The book emphasises how the Nazis enforced a level of brutal repression in Germany which made any organised resistance all the more remarkable and dangerous. It also correctly reminds us how members of the resistance, including those who had risked their lives, were seen as traitors: ’anti-German’ after the war, indeed for many decades.

But the resistance was far wider than the book suggests. As Steve Cushion and my book reveals, much of the resistance occurred from within the organised working class, and especially the young working class. More than any other organisation, it was members of the KPD, the German Communist Party, who provided the leadership and put their lives at risk.1 Yet the crucial role of the KPD and its members hardly feature in this book. The KPD as an organisation made deadly mistakes, not the least of which was its refusal to work with the Social Democrats, defining them as ‘social fascists’. (Of course the SPD were just as sectarian but they and their members were – generally – less significant as anti-Nazi leaders.) Later, the Hitler- Soviet pact also put a temporary kaibosh on KPD resistance.

But KPD members – and ex-members – were in the leadership of most organised resistance. To name just a few of the groupings, there was the Gebauer group, which started organising to get people out and illegal literature in from very soon after the Nazis took power, Another noticeable omission is the Uhrig group (though it is mentioned very much in passing) which operated a contact network with more than 20 cells in Berlin and concentrated, in so far as possible, on organising sabotage in the crucial German armaments industry. What this group, amongst a few others, also did which Thomas and Lewis remarkably omit, is to try to contact and organise amongst the hundreds of thousands of forced civilian labourers, POWs, as well, very rarely but remarkably, amongst concentration camp inmates.

Then there was the Bastlein group which succeeded in building an anti-Nazi network in 30 Hamburg factories, the Neubeuer/Posen group who produced hundreds of illegal leaflets during the war focusing on Nazi crimes of violence, the Leichleiter group based in Mannheim and many other tiny grouplets, some of which were led by non-KPD as well as KPD revolutionaries.

Their book also fails to go into the extensive anti-Nazi youth movement, (though again mentioning it in passing) of which the While Rose was one, untypical expression. The popular Edelweiss Pirates, whose politics generally grew out of anti-disciplinarian attitudes, and, mostly, had little or nothing to do with ‘left’ parties, came from working class backgrounds. Their legacy is still in dispute: was their wrecking behavior criminal or insurrectionary. Nor does it consider the different forms of desertion from the German army, even though this was not always ‘active’ resistance.

So why don’t Thomas and Lewis , in their detailed study, consider these many aspects of resistance to Nazi rule. I suggest that, although they do move away from the usual suspects, they still are bound by a ‘bourgeois’ view of the resistance. After all, how were the Nazis to be defeated? Splitting German military support for the Nazis came to be seen as critical. Alliances with the Allies came to be seen as vital. However virtuous, what significance did some thousands of working-class people risking and generally sacrificing their lives have in Nazism’s overthrow.

Indeed, a big question still remains as to what effect grassroots resistance did have. In the end, write Thomas and Lewis, the resistance ‘could cling to a spirit of goodness and purity,… a White Rose’. But what Steve and I argue is – and this is one profound difference in the perspective of the two books – that many of the working class resistance fighters wanted to bring an end to capitalism in favour of a socialist system.