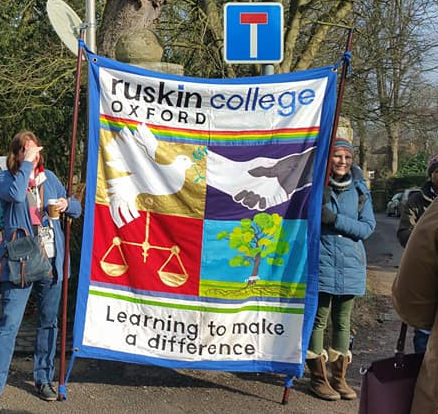 Ruskin College in Oxford has been accused of trade union victimisation following a string of disciplinary and redundancy threats directed at UCU members.

Three union reps are facing disciplinary investigations. One of them, Lee Humber, suspended for “spurious reasons” just days after the local branch passed a motion of no confidence in the principal.

The college has said it intends to commence disciplinary investigations into what UCU considers to be the trade union duties and activities of a further two UCU reps. The union said the college should be responding to the issues facing the college, such as financial deficits and course closures, instead of shooting the messengers raising concerns.

The three staff under investigation and another two members of staff – both union members – have now been placed at risk of redundancy. The college wants to axe four of the posts and move the other one on to a fixed-term contract. That would reduce the core higher education teaching team at Ruskin from 12 to eight.

The union said poor management had left the college’s finances in a challenging position, but that its managers needed to work with staff to try and resolve the situation, not attack trade unionists. UCU warned that if the college did not step back from pursuing unfounded disciplinary action and threatening to sack its members then it could not rule out strike action. Members are due to meet at an emergency general meeting next week.

UCU acting general secretary Paul Cottrell said: ‘Ruskin College’s response to challenging financial problems and a lack of confidence from the staff should be to address the issues head on, not shoot the messengers. Staff and students have made it clear they have no faith in the direction the management is heading.

‘The college has to step back from these attacks on our members otherwise we will have to step up efforts to resolve this mess and that may well include strike action. Ruskin College boasts of its working class, trade union and social justice history, but in reality our reps are being harassed and victimised.’

Ten trade union leaders have written to Ruskin College in Oxford to ask them to drop all disciplinary proceedings and withdraw threats of redundancy against staff after the college dismissed a trade union branch officer.

The letter outlines “profound concerns about the way Ruskin College management appears to be victimising trade union reps from the University and College Union” and that “that this course of action is not only wrong in itself, but also risks undermining the founding principles of the institution.”

The union is due to meet with college and has warned that unless managers step back from their current position over the disciplining of union reps and threatened redundancies, then it will give consideration to calling for a boycott by trade unions of the college.

The current spate of redundancies will essentially kill off trade union higher education courses at the college as it lurches from educating and nurturing trade unionists to sacking them.’

We write to you in our respective capacities as General Secretaries of ten national trade unions, to raise our profound concerns about the way Ruskin College management appears to be victimising trade union reps from the University and College Union (UCU).

Given the proud history of the College – built on Labour movement values – we are concerned that this course of action is not only wrong in itself, but also risks undermining the founding principles of the institution.

As we understand it, three reps have been placed under unwarranted disciplinary investigation, whilst a further two union members have been placed at risk of redundancy. If financial circumstances are difficult, we would expect management to enter into serious discussions to explore a way of resolving the situation. There can never be an excuse to victimise or harass trade union reps.

We would ask that you drop all disciplinary proceedings and withdraw threats of redundancy and pursue a constructive approach towards working with UCU reps going forward. Otherwise, we stand ready to give our full support and solidarity to members of Ruskin College staff should they move towards taking industrial action.