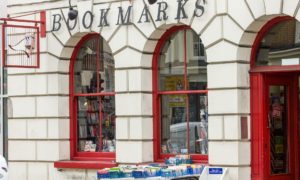 Bookmarks bookshop in Bloomsbury, central London, has called on supporters to attend a solidarity event following an attack by far
right thugs.
Twelve men invaded the shop last Saturday, destroying displays, wrecking books and chanting Alt-right slogans. One was wearing a Donald Trump mask.
Since the attack Bookmarks the socialist bookshop has received messages of support from leading figures in the trade union and labour movements and thousands of activists from around the world.
Those tweeting their support include singer and activist Billy Bragg, Rupa Huq MP, historian Louise Raw and Guardian columnist Owen Jones. David Lammy MP tweeted: “The normalisation of far right politics is
already leading to chaos and vandalism on our streets. Fascist thugs attacking book shops is the logical conclusion to a political movement which rejects facts and experts. We need to be vigilant.”
Bookmarks is holding a solidarity event in the shop on Saturday 11 August from 2pm. Throughout the afternoon there will author readings as well as speakers from the trade union and labour movement.
Dave Gilchrist, manager of Bookmarks, said: “This horrific attack on a radical bookshop should send shivers down the spine of anyone who knows their history. The Nazis targeted books because they knew how important radical ideas are for challenging racism and fascism. The same is true today, and that is why we have to show that we won’t be intimidated.”
Bookmarks is also calling on supporters to donate funds to help bolster security in the shop and to replace lost stock. Donations can be transferred to: Sort Code: 30 93 29 A/c: 00089719