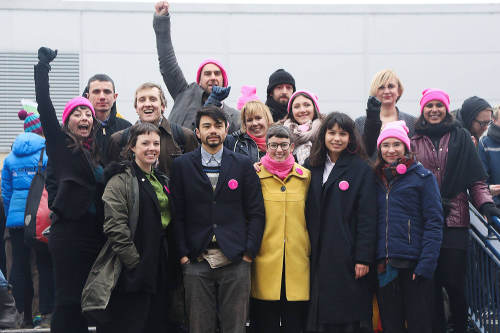 They have now been convicted. The Stansted 15 expected to face retribution for their protest. They never expected to be found guilty of terrorism offences. But on Monday, the group became the first activists involved in a non-violent direct action protest to be convicted under laws that were formulated in response to the Lockerbie bombing.

The group had information of people meant to be on that flight, who would be put in extreme danger if they were forcibly returned. The group knew about their stories from the website Detained Voices. For example, a lesbian women feared persecution by the Nigerian authorities if returned to Nigeria, her abusive ex husband who she was made to marry had also told her he would kill her on return. Nigeria is one of the most dangerous places in the world for LGBT people. The Stansted 15 also knew that the Home Office was not respecting rule of law, some of the people scheduled to be on the plane had ongoing claims and had not exhausted the legal process. The Stansted 15 were deeply concerned about the treatment of detained people during the deportation process as well.

From Nita Sanghera – UCU Vice President to the Stanstead 15

I just want to express my disbelief at the verdict that has been issued today.  You, and the others have every right to protest on behalf of those that do not have capacity to do so. Your right to protest is enshrined in the human rights act, which is why I am unable to comprehend the outcome that has been delivered to you and your comrades today.
As a union we cannot accept this verdict, and I will be ensuring that we do everything we can to get this overturned.
In solidarity
Nita Sanghera – UCU Vice President

– Charter flights (private, mass deportation flights chartered by the Home Office), like the plane stopped, are a particularly brutal, secretive and barely legal plank of the hostile environment policy as championed by Theresa May. People are racially targeted based on their perceived nationality, then ripped from their communities, friends and loved ones before they are forcibly deported. People are often deported before they can get access to a decent lawyer. Legal aid is available in limited cases and it’s very difficult to access even where it is available. People are seriously abused by guards involved in the deportation process. Being tranquillised, ‘dragged like a goat’ in a restraint belt, and racially abused, are all commonplace experiences. Charter flights take place in the middle of the night in a remote part of Stansted airport where the public cannot observe the dark deeds that are taking place. This offends common decency.