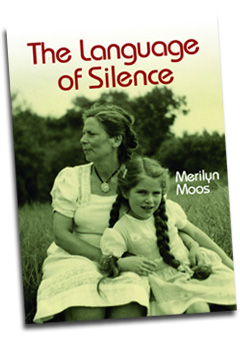 If you’ve ever imagined that your past is behind you, think again.

As her mother becomes increasingly infirm, Anna desperately pursues clues about her parents’ hidden past. From Nazi Berlin to war-time Oxford, from Dublin to Durham, from 1930s’ Stalinist Moscow to the files of MI5, layer upon layer of subterfuge and secrecy are peeled away. As 1930’s German letters from the grave are brought to light, The Language of Silence sheds light on how the tragedies of the past are resolved in the present.

The novel, set in London in the early years of the 21st century, provides a remarkable exploration of the personal consequences of political events and political resistance, and how those consequences have an impact across four generations of one family. It is a novel of immense power, shocking in its portrayal of family life, which nevertheless inspires hope for the future.

MERILYN MOOS was born in Oxford and moved to Durham with her parents as a young child. She read Philosophy, Politics and Economics at St Anne’s College, University of Oxford, got a Masters in Contemporary Cultural Studies, and became a F.E., then H.E. lecturer. Merilyn has played an active role in a variety of grassroots union and socialist activities. She has also appeared on television in recent years: BBC4’s Jews on the second generation and RTE’s documentary Flesh and Blood. Merilyn lives in north London, where she is currently working on her second novel.

For further information, Merilyn can be contacted via merilynmoos@blueyonder.co.uk

“This is a book about the shadow of the Holocaust, about constantly being torn between the past, present and future… It is a story told with a great deal of compassion and sensitivity, the reader caught up in carefully crafted vignettes and snapshots… Moos manages to keep the suspense hanging by a thread as family secrets are revealed little by little.”
David Clark, Second Generation Network

“In this evocative novel,illuminated by a controlled but intense emotion, not without humour, the second generation daughter of left-wing Jewish immigrant parents, forced to flee Hitler’s Berlin, examines the impact of the Holocaust. The novel slowly yields up the family’s silenced history as the narrator seeks to bring the fractured pieces of the past into a better relationship with her present life.”
A. Potter