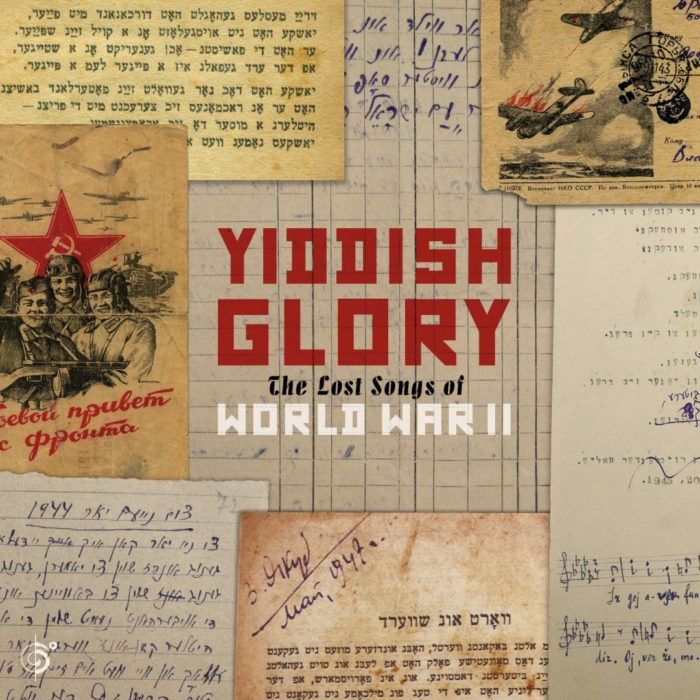 Six Degrees Records has just released Yiddish Glory: The Lost Songs of WWII. On this collection of Yiddish music from the Second World War some very talented modern musicians perform previously unheard songs that call for the defeat of fascism and revenge on the Nazi oppressors.

In the manuscript department of the Ukrainian National Library, archivists found a number of sealed boxes. They contained hand-written Yiddish documents dating back to 1947. Upon examination, it turned out that the pages contained thousands of songs, written by Yiddish-speaking Jews in Ukraine during World War II. Leading Jewish Soviet ethnomusicologists and linguists, including the legendary Moisei Beregovsky, had archived this music by Jewish refugees, Jewish soldiers in the Red Army and Holocaust survivors, who had defied Hitler in song. Stalin’s authorities arrested Beregovsky and his colleagues as part of the campaign, started in November 1948, which aimed to liquidate Jewish culture, and the documents were sealed. Scholars believed them to have been destroyed forever. University of Toronto professor Anna Shternshis learned of these songs buried deep in the archive, none of which have been performed in nearly 70 years. Shtershis worked with Psoy Korolenko, a poet, philologist, and performer of Yiddish music, to reconstruct the tunes for these songs.

Through her examination of the songs, Professor Shternshis found a story of Jewish resistance and survival. Songs came in letters from refugees and soldiers, including Soviet women who joined the Red Army. Often they were written by people who met their deaths soon after writing them. Revenge is a prominent theme in the collection, often accompanied by graphic details, like one about a soldier named Misha chopping German soldiers into pieces. She says “The presence of revenge and the importance of revenge is what makes these materials stand out from the body of other Holocaust literature”.

At the time of transcription, it would have been obvious to the ethnomusicologists which popular Yiddish and Soviet songs the lyrics were sung to. Psoy Korolenko conducted what he referred to as “musical archaeology”, a process that included analysing and contextualizing the words to link the lyrics and popular melodies of the period. The project now consists of five vocalists and five classical instrumentalists, and their work has culminated into an album, Yiddish Glory.

More details and a chance to listen to the songs here…