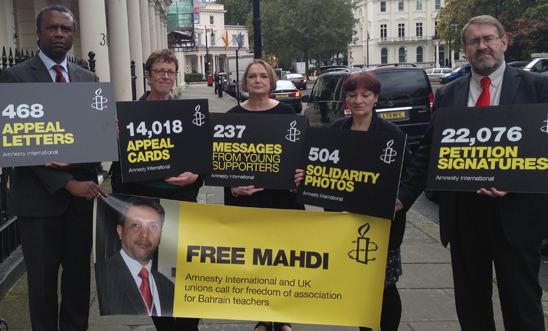 The London Retired Members Branch of UCU initially became aware of the arrest and maltreatment of the leadership of the Bahrain Teachers Association (BTA), and the outlawing of the organisation, through an Education International (EI) report published in November 2012. EI provided a vivid account of the incarceration, by a military court, of Jalila al-Salman and Mahdi Abu Dheeb, Vice President and President of the BTA respectively. Essentially their “crime” was support for the Bahraini democratic reform movement which won mass public involvement within the wider context of the “Arab Spring”. That popular social and democratic upsurge was met by gross state suppression in the form of a mass armed assault on non-violent demonstrators at Pearl Roundabout in Manama, the capital of Bahrain, in February 2011.

Since then a series of texts examining the issues and events surrounding the assault on the BTA and other trade unionists, written by branch member David Binns, have been posted online. These can be read variously on both our branch website and that of UCU nationally, as well as at MENA Solidarity Network. The key materials are listed, in order of publication, below.

Further articles and reports concerning both the BTA and the wider struggle for social transformation in Bahrain will be appearing over the coming months. As is intrinsic to all labour movement struggles, those in Bahrain and the entire MENA region are international and essentially global in nature. In particular, the centrality of the British ruling class and its state to both creation and perpetuation of the Bahraini tyranny calls for concerted and sustained oppositional solidarity activities by trade unionists in Britain.

The decision, announced in December 2014, to open a British military base in Bahrain, where under present arrangements there is and can be no meaningful public mandate, is only the most recent of two centuries of colonial and neo-colonial insults to the democratic impulses of the people of Bahrain, workers first and foremost. As such it must be opposed alongside all British state support, both open and covert, for the regime and the market for British armaments and security advisors over which that regime presides. Those arrangements, and the political economy which they sustain, both presume and help reproduce denial of democratic and worker rights.