The Police Crime Sentencing and Courts (PCSC) Bill gives the police increased powers to stop and search which will impact disproportionately on Black youth. The sections of the Bill restricting the rights of travellers include provisions that would criminalise the way of life of Gypsy and Traveller communities.

The specific provisions relating to protest propose increasing the powers of the police to place conditions on the right to public processions and assemblies but without detailing what those conditions might be. They introduce a new consideration for the police to take into account, the level of noise. This requires the police to determine whether the level of noise is such that it could cause “serious disruption to the activities of an organisation which are carried on in the vicinity of the procession” or such that there may be a relevant or significant “impact” on persons in the vicinity. The very nature of peaceful protest is that it is noisy – whether through chanting, shouting, or Samba / drumming /musical support. Having put into place their own conditions on the protest assembly or procession, the police may immediately arrest protestors. While legal challenges to the lawfulness of the arrests and prosecutions may result in acquittals, this is no consolation to the protestor whose rights are abruptly curtailed by arrest.

The current provisions of the Public Order Act allow for defendants to argue lack of knowledge when prosecuted for violating any conditions imposed by the police on the protest.  The PCSC Bill disallows this defence by making it an offence where the person “ought to have known” of the conditions, effectively criminalising protestors who inadvertently commit a breach by being in the wrong place at the wrong time.

The Home Secretary would have an extensive power to declare the kind of protest and causes it deems inconvenient or unacceptable and provide the police with a licence to limit them.

Now the Government has put forward a raft of amendments granting the police new and oppressive powers to stifle dissenting voices further.

Liberty has warned that the Bill is one part of a larger campaign by the Government to remove itself from accountability and undermine everyone’s ability to stand up to power. They say: These additions to the Policing Bill must be seen for what they are: a power grab.

The right to protest must be defended. 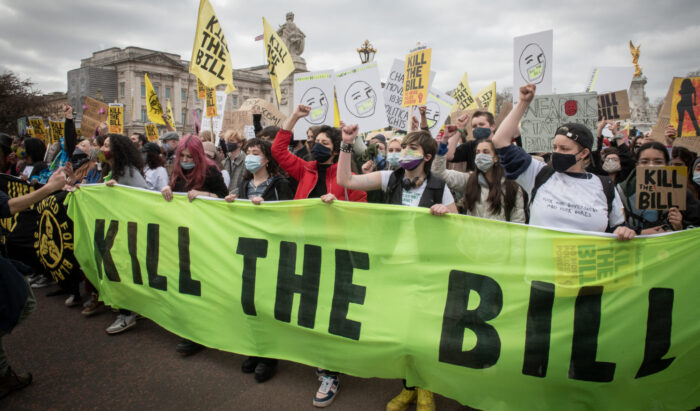